Prior to adopting landscape business management software, Shawn Ryan, owner of Denver-based Environmental Designs, says the company used several different solutions that they tried to piece together to be effective.

However as the firm, which is devoted to high-end landscape architecture and construction for residential clients as well as landscape maintenance services for commercial clients, grew rapidly. It became increasingly apparent that using a combination of Excel spreadsheets and QuickBooks for accounting simply wasn’t enough. Ryan says they were wasting tremendous amounts of time with duplicate data entry and yet their needs still weren’t being fully met.

They needed a solution that was much more robust.

Initially, Ryan says that he tried out some simpler green industry software systems which he thought would offer more than QuickBooks and Excel. But what he found was that they still didn’t meet his needs.

“The systems we tried previously were supposed to integrate easily with QuickBooks, which we still planned to use for accounting,” Ryan recalls. “But they didn’t integrate well. What we ultimately found was that we still felt as though we were using multiple systems, defeating the purpose of why we were looking for a new system in the first place. What we needed was a software program that could handle all of our needs, not just bits and pieces of them.”

Recognizing a Need for Urgent Change Due to Growth

As the company continued to rapidly grow, Ryan—whose background is in accounting—also knew that getting away from QuickBooks would be key. Not only was it not as secure as he’d like, but it didn’t have the complex capabilities he was looking for as the business grew into the multi-million dollar range. A revenue stream like that required a complex solution.

That’s when Ryan says he chose Asset. Looking back, he says his only regret is that he didn’t do it sooner.

“I know that a lot of businesses use QuickBooks for accounting and at some stages, it works,” Ryan says. “I’ve used it. But with a background in accounting and my knowledge now of what’s out there, I just can’t imagine running a multi-million dollar company on it. The platform that Asset is on for accounting is so much better. It’s more secure and it’s a fully integrated system that does it all.”

Prior to using Asset, Ryan says that the company wasn’t even attempting job costing. He says there was “just no way to do it with spreadsheets” without it being completely time prohibitive.

“There was no way to figure out where we were making the most money—or losing money—without putting in hours and hours of work, which we didn’t have time to do,” Ryan says. “It simply wasn’t worth it with the resources that we had.”

But, that’s all changed.

Now, with accurate job costing, Ryan says that he has his finger on the pulse of where the company is making money and that allows him to continue to grow profitability. He was able to get rid of the jobs (or raise the prices) on jobs that were hurting the bottom line.

Ryan says that the company stands to bring in $23 million in revenue this year.

And it’s more than just job costing that’s improved. Ryan says that his estimating is more accurate, his scheduling is more efficient, and money coming in and out of the company flows seamlessly through all departments—all thanks to using a software system that is robust enough to “handle it all.”

Using Asset to the Fullest

Ryan attributes his success to using Asset to the fullest—something that he feels not every company does. While Environmental Designs takes advantage of every single aspect of the software—including iCrewTek, its mobile component—Ryan says that he has talked to other companies that only use bits and pieces of the system. 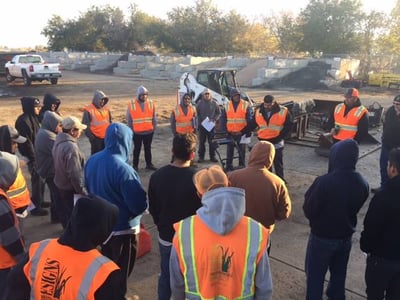 “We are literally using every aspect of the system to our benefit and it’s all running seamlessly,” Ryan says. “I think there are a lot of companies that are still exporting a lot of data to Excel or importing data from elsewhere. At the end of the day, you have to ask yourself if that’s the most efficient use of your time? The fact is, everything can be done inside of the program. There isn’t a lot of reason to work outside of it.”

Ryan says that he feels companies may be selling themselves short by not implementing the product to the fullest. They’re not running as lean and efficient as they could be.

“We are looking to bring in $23 million this year in revenue and we are doing that with five people in the office,” he stresses. “That’s something that shocks people. There are companies bringing in a lot less revenue but with the same number or even more people working in their office. That’s because they aren’t using an integrated software program that can take over many of the tasks their office staff handles. We’re at a point where we’re basically running on autopilot in the office. We are no longer bogged down by menial tasks.”

But Ryan admits there’s a learning curve to get to where he is today—and it’s one that he thinks a lot of companies are scared to face.

“I think that companies who want to implement Asset to the fullest need to have an employee who is solely dedicated to that implementation process,” he says. “That’s what we had to do and it was admittedly no small feat. But I can say without a doubt that the benefits have far outweighed the investment of time and money. I have looked at every single software product on the market and I feel confident saying that Asset is the best. I recommend it to everyone. But I also tell them to be prepared for that implementation process to be a challenge.”

Still, once you get through it, you’ll be glad you did, adds Ryan.

“As I said, my only regret with Asset is that I waited as long as I did to implement it,” he says. “There’s no question that it’s had a major impact on our profitability.”

Want to learn more about how Asset can make your business more profitable? Getting started is easy! Let’s chat for 15 minutes and see if Asset is the right tool for your growing company.