Creating a Culture of Accountability How metrics and analytics can help

Last month, we talked about the way in which reporting can help landscape business owners to keep a finger on the pulse of business. We spoke to Meredith Jedlicka, training coordinator for Ed Castro Landscape in Atlanta, Georgia, and she shared how reporting helps to create goals for the company—and to measure how close they are to meeting them. Jedlicka also talked about how understanding the metrics and data can help landscape business owners create a culture of accountability.

In a successfully run business, a strong culture of accountability comes down to trusting that employees are doing their best. It also means that they take ownership of their work and don’t need a constant watchful eye to perform optimally.

We recently caught back up with Jedlicka to find out more about how metrics and analytics have helped Ed Castro Landscape to foster a culture of accountability.

According to Jedlicka, the company has found that it can be challenging to hold people accountable if the data can’t be trusted. This makes it imperative that there is a strong reporting system in play, so that there’s no room for excuses.

While holding employees accountable can sometimes feel as though it has a negative connotation, the truth is, people want to know what they should be doing. They want to know if they’re hitting their target goals, says Jedlicka. This is why creating a culture of accountability with analytics and metrics can actually help with happier employees and overall retention.

“People want clear goals—and they want check-ins,” she says. “If someone is having trouble, they’d rather it was caught before it’s a huge problem. So, we find that our team appreciates knowing exactly where things stand. They want to be held accountable.”

The goal to making a culture of accountability a positive is hiring the right team members in the first place, Jedlicka continues. You want to hire the kind of people who care about getting the work done the way it’s supposed to be done. You also want folks who care about how they can excel. The best team members are those who are asking, where do I stand now and how can I get better?

Metrics and analytics allow for this.

A Visual Look—At a Glance

Jedlicka also says that the use of Include Software’s iKPI tool, a robust analytics dashboard, has been powerful in terms of a culture of accountability.

“A key advantage of iKPI has been that our salespeople or our estimators can have a look at the data without waiting for someone to run a report,” she continues. “We don’t even necessarily need to have a meeting every week—and we’ve scaled back some of our meetings because this dashboard view is now available at all times. With live data, our people are able to see it—and own it. We have goals laid out but it’s more empowering for them to see it in front of them in real time.”

Jedlicka says that another accountability benefit of using iKPI has been that team members are inspired to embrace accountability for data accuracy. If they know that the dashboard is going to get pulled up in a meeting, and they know that they have more sales than what’s showing up in the system, then they’re more inclined than ever to make sure that’ve corrected or updated any data input.

This has also meant a decrease in admin workload, as often it’s an administrator who is fixing data input problems. But now, with the visuality of the iKPI dashboard, team members are more committed than ever to ensuring they’re putting in accurate numbers in a timely way.

“It’s just another way that it has helped our team to take ownership of reporting their numbers,” Jedlicka explains. “The reporting tool was always there—but I think iKPI just makes a lot more sense to everyone. It removes the learning curve that might have helped people back.”

Jedlicka says she feels it also makes people think of the data as more important, too.

“It just feels more special with the visual nature—seeing everything in graphs and laid out right in front of you,” she says. “Reporting has always been a part of what we do, but now our people really understand why and want to participate. That’s helped to create a culture of accountability.” 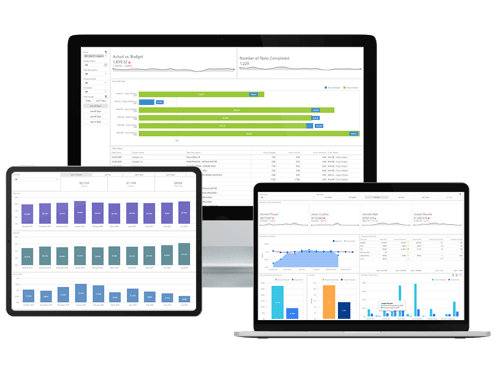